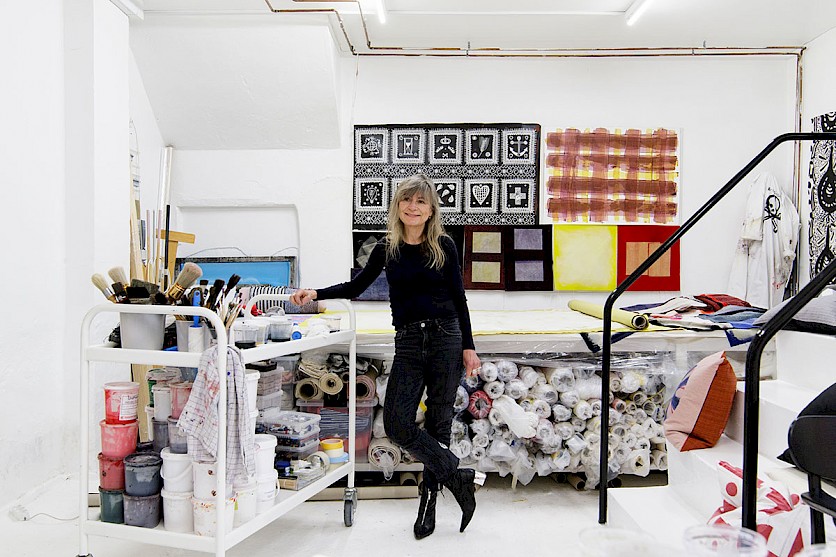 Only a wholeness can be achieved by capsulating the essence of opposites
by conciously choosing inclusion over exclusion by choice,
in order to complete, not by calculation but by nature.

Danish textile artist and designer Vibeke Rohland was born in 1957 in Gladsaxe-Søborg outside Copenhagen. As a child, she took up embroidery, knitting and crochet because she was fascinated with the textures and colors created by the thread and the yarn. That child would go on to study art history at the University of Copenhagen, and then textile design at the Royal Danish Academy of Fine Arts, graduating in 1986. The same year, she received a grant that enabled her to travel to Paris for two years where she hand-painted fabrics for use in haute couture and interiors for Eliakim Création des Tissus.

Between 1981 and 1989, Rohland helped to launch and run the experimental gallery KONGO, where she and her colleagues collectively ran exhibitions year-round and published the art, music and poetry magazines KONG and ATLAS. In 1994, the Danish Ministry of Culture invited her to participate in the São Paolo Textile Biennale and in 1995, she received a grant from Nationalbanken to develop a dozen tapestries in Oaxaca, Mexico. That same year, Rohland launched her own studio to produce abstract work at the intersection of art, craft and design.

Since then, Rohland has been designing everything from linens, curtains and t-shirts to scarves and porcelain patterns for respected brands that include Hay and Georg Jensen Damask, Ikea and Agnes B. Kvadrat produces her upholstery fabrics and drapery, Paustian her bed linens and graphical umbrellas while, for FDB Møbler, she has created a damask tablecloth, bed linens and throws made in cashmere and wool. She has fashioned table linens for Royal Copenhagen, upholstery for the DSB Royal Danish Railway and tapestries that billow with the passage of theater-goers for The Royal Theatre. Her client list also includes Stilleben, Bang & Olufsen/B&O, Bodum, Kopenhagen Fur and ESPRIT Home New York, among others.

Meanwhile, Rohland has been exhibiting hand-painted, printed, embroidered, woven and knit patterns on felt, paper, linen, cotton, silk and more, in world-class art venues, including the Borås Museum of Modern Art in Sweden and the Kunsthal Charlottenborg in Copenhagen. Her work has been collected by the Design Museum Denmark, Focke-Museum Bremen and Neue Sammlung München.

Rohland’s work, which evolves from minimal, abstract motifs--pluses, minuses, dots and squares--to which she returns repeatedly, has been published in the International Design Yearbook (1997 - 2002, 2007), Frame magazine (July/Aug. 2000), Scandinavian Style by Ingrid Sommer (Carlton Books Ltd. 2003) and INSPIRED, a book about how creative people think, work and find inspiration (BIS Publishers, 2005).

She has been a guest lecturer in graphic design and textiles at universities in Sweden and Denmark, including the University Textile College of Borås, the Danish School of Media and Journalism, the Design School Kolding and the Royal Danish Academy of Fine Arts Schools of Architecture, Design and Conservation.

In 2014, Rohland’s artist book The Hole Story was exhibited at Nivaagaard Samlingen, each page composed of collages, experiments, brushstrokes, screenprinted images and stitching, pattern-play that unfolds in black and white dots and lines across pages that are each a world unto themselves and yet part of a larger story told in the language of abstraction.

In April and May 2015, Rohland’s solo CrossRoads exhibition opened at the Superobjekt Gallery Copenhagen, including two tapestries, Scott and BlackWhite, painted and screenprinted on industrially produced upholstery (a previous Rohland design for Kvadrat) and denim, respectively, in order to contrast the subtle and exaggerated, the flawed and flawless, the mass-produced and the unique.

In May 2015, at Copenhagen City Hall, in the presence of Her Majesty Queen Margrethe, Rohland was awarded the 138-year-old Hetsch Medal, the country’s highest arts and crafts honor, for her silk-screened Crossroads’n Gingham textile. Based on the traditional gingham pattern (a lightweight woven, double-sided, repeat of squares) she printed this piece from dots of thickly layered white ink painted on a single side of the material, giving the piece the weight of a tapestry and, despite its apparent regularity, no repeat.

During the summer of 2015, two of Rohland’s CrossRoads tapestries (Scott and BlackWhite) were juried into The Biennale for Craft and Design 2015 at Slottet, Carlsberg Byen. The preparatory work for which as well as other works, were typically executed in materials matching her temperament, such as ink, pastel and oilbar.

In the early fall of 2016, Rohland’s solo exhibition at Copenhagen’s SORT BLAEK Gallery showcased the screenprinted white brush strokes of her Road/trip tapestry and pieces painted on a dishtowel fabric she had designed for Georg Jensen Damask. These pieces represent unstructured movement through a landscape and embody a consciousness of forward movement, self-expression and the serendipity offered by both challenges and opportunities along the way.

In 2017, Rohland revisited knits, integrated into her practice as a representational element 20 years before, in a juried group show entitled ISTHISKNIT. The new pieces, Aero #5/Red and Aero#5/Blue, featured a screenprint of the oversize image of a knit on velour, turning a 3D texture into a 2D pattern, punning on a union of pictorial representation and handcraft.

In June 2017, in a collaboration with Adidas, Kvadrat applied Rohland’s Squares fabric, a pattern made up of dots, to a pair of limited-edition Stan Smith sneakers, bringing together the products of two iconic international brands with Rohland’s meticulous artisanal process.

In a project that began in 2000 but continues today, Rohland applies her unique process, blending craft and design with art, to her BlackStar screenprints. BlackStar riffs on her signature plus-sign in offset layers of overlapping hand-mixed pigment to form a blunt star on heavy paper. Through this prolonged exploration of color and form, she tests the limits of her materials and media, and allows repetition, abstraction and variation to reveal the potency of color and color combinations generated by only the smallest degrees of difference. The ongoing project, like all of Rohland’s work, considers some of the most fundamental components of our material culture, while searching for unlimited self-expression within the confines of a limited form.

Shonquis Moreno is a writer who lives and works in the Bay Area, contributing to publications such as Wallpaper, Departures and Kinfolk. A former design editor for Frame, Surface and Dwell magazines, she also writes books on topics ranging from window display, product design and branding to architecture, interiors and travel.

◾1999 Gallery The Hand and The Spirit, Scottsdale, Arizona. “The Hole Story II”.

◾1992 Rampen Bikuben “Stof Til Brug1”. Artist of the year, lithograph at Edition Copenhagen.

◾2007 The Biennale for Design and Craft, Trapholt.

◾1997 The Biennale for Crafts and Design. Kunsten, Museum of Modern Art Aalborg.

◾1995 Designmuseum Denmark. The Biennale for Crafts and Design.

◾1984 Krasnapolsky “KONGO Presents” with members of the exhibition group KONGO.

◾Crossroads, folder with text and interview by Professor Jean Givens at University of Connecticut.

◾The Royal Academy of Fine Arts, member of the Society of Artists.

◾KONGO 1981-1991. Member and collaborator of the experimental gallery KONGO. The gallery was run collectively with exhibitions all year round and magazine KONG featuring art, music and poetry.